Journal Prompt: Write About One of the Best Days of Your Life 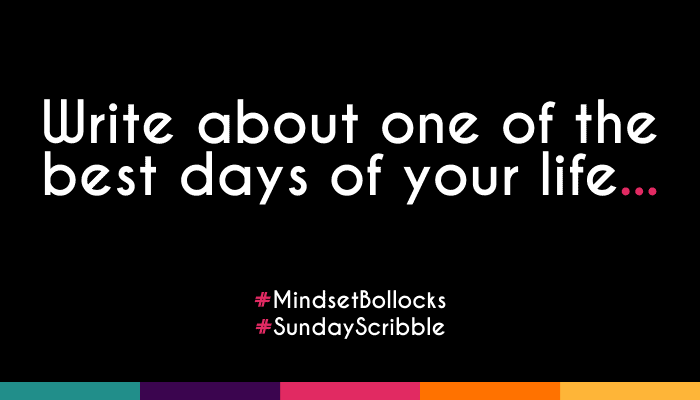 “Did you have a good day then, mum?” my 9 year old son asked as I tucked his tired and tiny little frame into bed last night.

“Good day? Blake, it was one of the best days of my life.”

“Yes, definitely. I thought I would hate it but I was just so proud of you and your dad looked well hot too!”

We both laughed. Kissed, cuddled. “Love you mum. You’re the best” he whispered into my neck as I hugged him tight and I collapsed myself into bed after a long, hot and dusty day.

That was yesterday. It was one of the most unexpected best days of my life. Here is why…

The Bike Obsession Begins – for Both of Them!

At the beginning of the year, my husband Shaun said he wanted to get a motorbike. For years I have said this is a stupid idea and have said a very firm ‘no’ when it came to any kind of motorised bike on two wheels.

We’d bought Blake a quad bike for Christmas and as the two of them had sat watching YouTube videos for hours about quads, it showed pictures of dirt bikes on dirt tracks and brought it all back for my husband. His dad had raced bikes when he was younger and Shaun reminisced about his childhood hobby and how he’d like to take it back up.

After Christmas, I don’t know if it was the winter blues or me putting the brakes on his dreams but Shaun was quite down. We agreed that since we’d renovated the house, he’d lost his purpose a little and it was all work then home, work then home with no hobbies in between. I had started working on a Sunday on the radio and he was spending more and more time being a hermit.

I realised that in our 13 years together, he’s always supported me in my dreams and crazy endeavours. So why was I not being supportive? I know I was worried about injury and the fact that bikes are dangerous but during an open and honest conversation about it, he made the very good point that his job involveshim dealing with hundreds of thousands of volts of live electricity every day. He has a dangerous job. So what was the difference?

It was a great point made and so he started to look for a dirt bike for himself.

As his birthday approached, he treated himself to all his new bike gear and he changed instantly. He was excited, happy and couldn’t wait to get on his bike. He was like the old cliched kid at Christmas. Here he is, pretending to ride his bike in his new kit.

Trying to work out my new blog and I need this video in a post I'm writing. It won't display, but it pulls in vids from Facebook. So gonna upload it here so I can put into the blog.All will become clear later.This was Shaun back in January wearing his birthday present to himself – his new bike gear for his new dirt bike. 🤣🤣🤣

Fully kitted out, bike tweaked, new parts ordered and they were ready! Off Shaun and Blake went, with brother Dean who also got himself a bike. They were heading to racing tracks a couple of times a month before the pandemic hit. Blake on his quad, the big boys on their bikes, taking it in turns to watch and supervise Blake between their track times.

Blake loved it so much and a new a new found passion had formed. Unfortunately, he ragged his quad so much on the tracks that it pretty much fell to bits so it was collected a week before lockdown for repair and that’s where it stayed. Knowing that Blake was taking such an interest in the sport, Shaun said he’d found a motorbike for him. My reservations surfaced again, but I knew this would be Blake’s dream. I also know he’s a sensible kid who wants to do the best so he would listen and learn this new skill of going from four wheels to two.

A Surprise He Wasn’t Expecting

We took Blake to our local pub and Shaun showed him the picture of the bike we had reserved. He broke down in happy tears as Shaun and I also filled up. “Thank you. I was not expecting that. It’s not even Christmas. Thank you!” he sobbed as he cuddled Shaun and I had to take deep breaths to not bawl myself!

Then the pandemic hit. We couldn’t pick up the new bike and the quad was at the shop for repair. The dirt bikes were put in storage. Biking was out of the question for the foreseeable future. All of them were gutted.

Last Wednesday, Boris Johnson announced that open air sporting venues could reopen with social distancing measures in place. Shaun went off to the tracks but Blake, minus a quad, couldn’t go so had to stay home with me. He was disappointed but very grown up about it and instead sat and watched motocross videos all day, telling me all about different bikes. Turns out he’s been doing this every day and watching YouTube videos about bikes and techniques for riding.

All last week Shaun asked if we could go on Saturday as a family. I checked the AMCA (Amateur Motocross Association) website and motocross is covered under outdoor sporting recreation. The track has strict social distancing measures in place and it was permitted. So off we went as a family, my first time at a dirt track.

Going to the Track for the First Time

I’ll be honest, it had never bothered me to go. I felt like it was a dad and lad thing, a chance for them to bond and not for me at all. Blake kept asking me to go before lockdown but I was working on my second book and the Saturdays they headed out gave me a chance to write or catch up with friends.

This time I said yes and I am so glad I did. I LOVED it.

Seeing Blake’s face of pure joy and happiness as he tried his new bike for the first time on the track was magical. I was flooded with pride, trepidation. extreme worry and utter elation watching him take jumps and slide around corners. Seeing Shaun teach him and Blake listen intently was amazing. In fact, I think Shaun should take over the home schooling I have become so terrible at!

I haven’t seen Shaun ride before and I’ve always worried his hot headed competitive streak would make him a bit of a dangerous knob on the tracks. I was wrong on that too. I was so proud watching him whizz around and fly for what seemed like miles in the air. He also looked HOT in his biking gear. Which was a nice Brucie bonus. It was dusty and noisy but seeing how much joy this brings them both was special to witness. 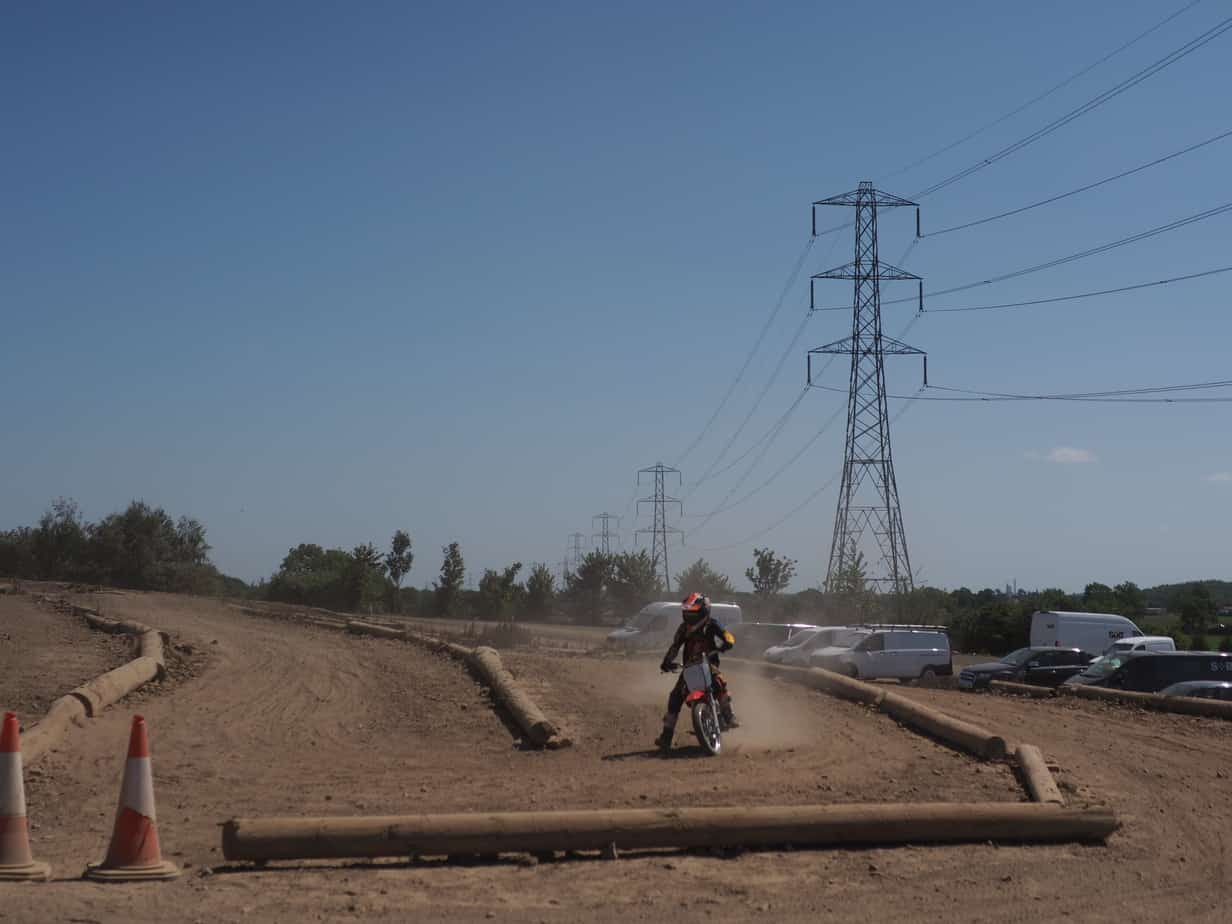 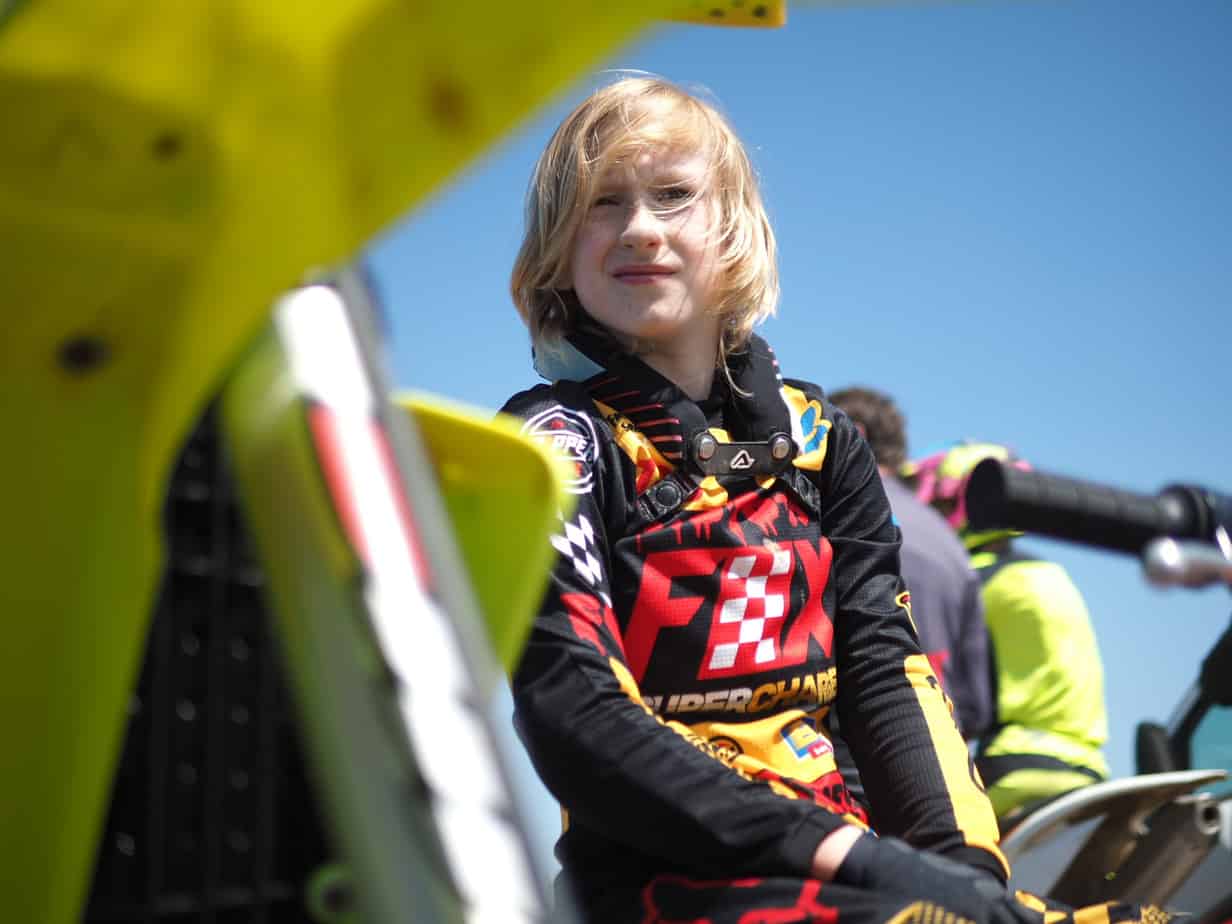 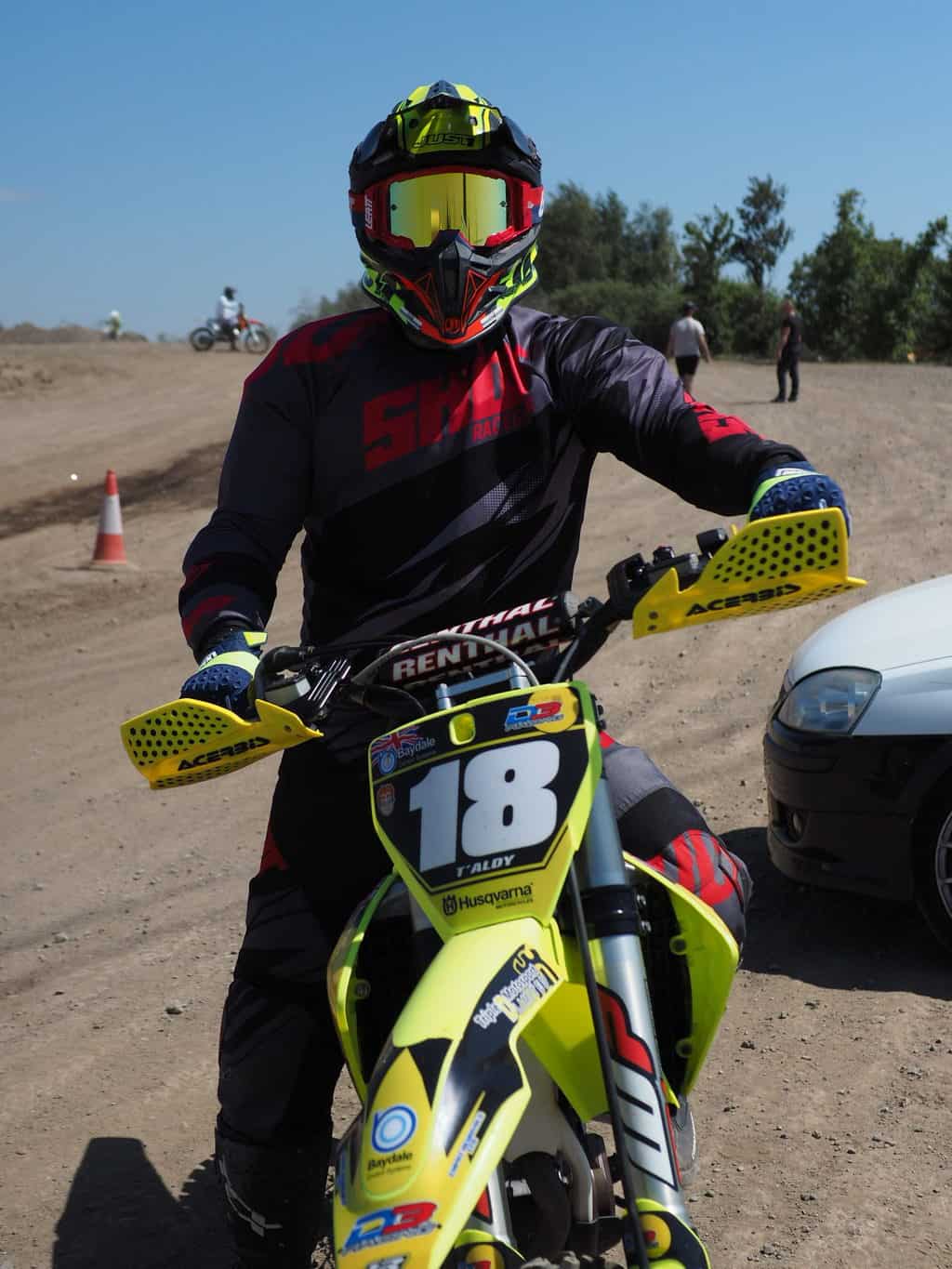 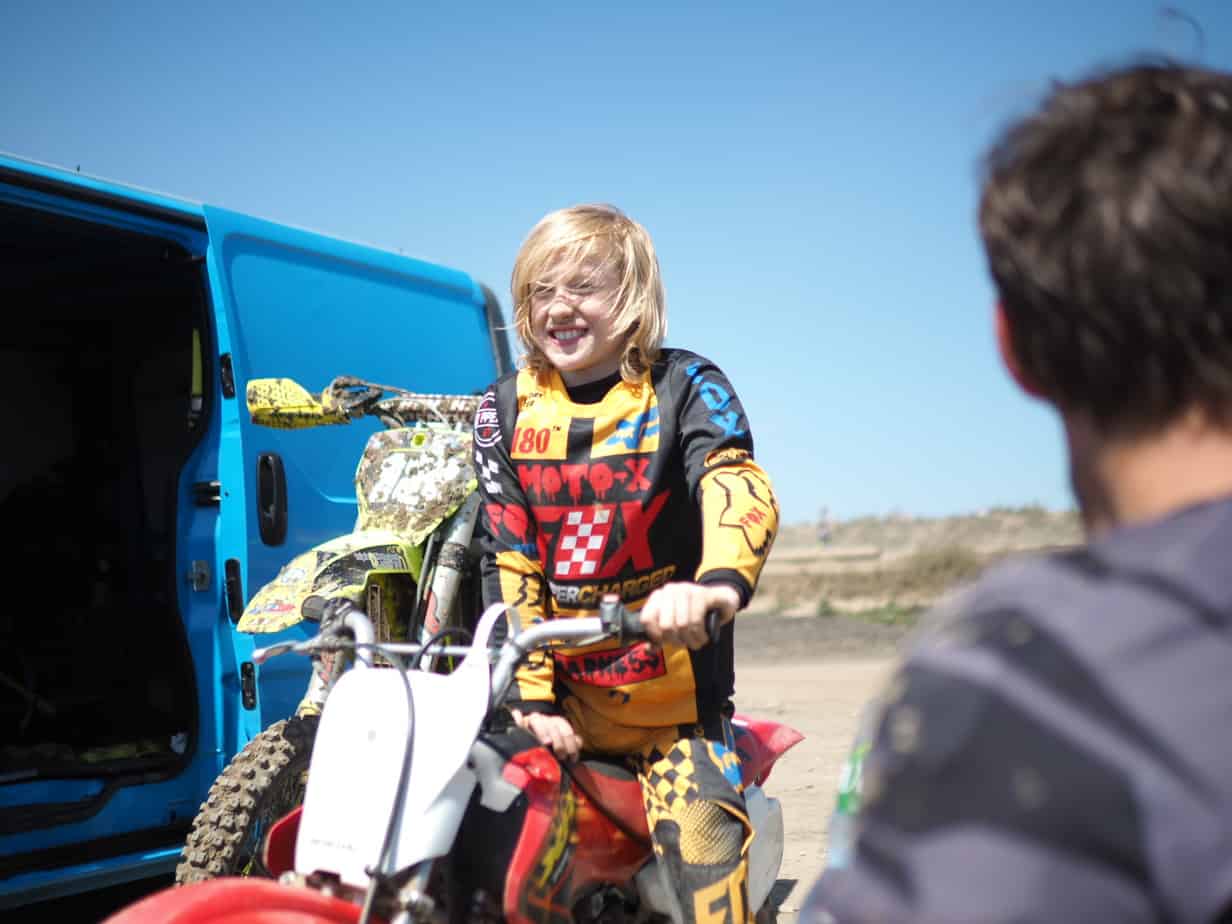 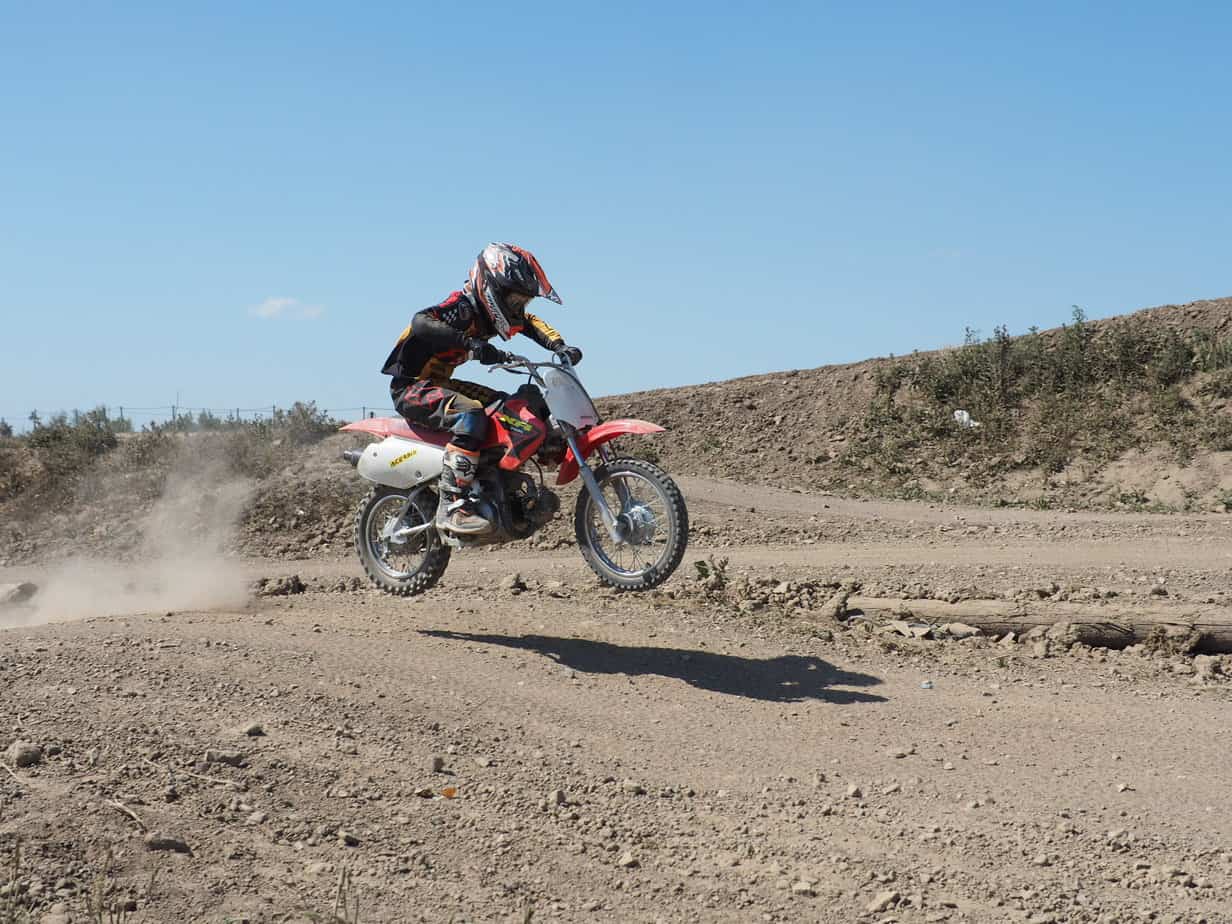 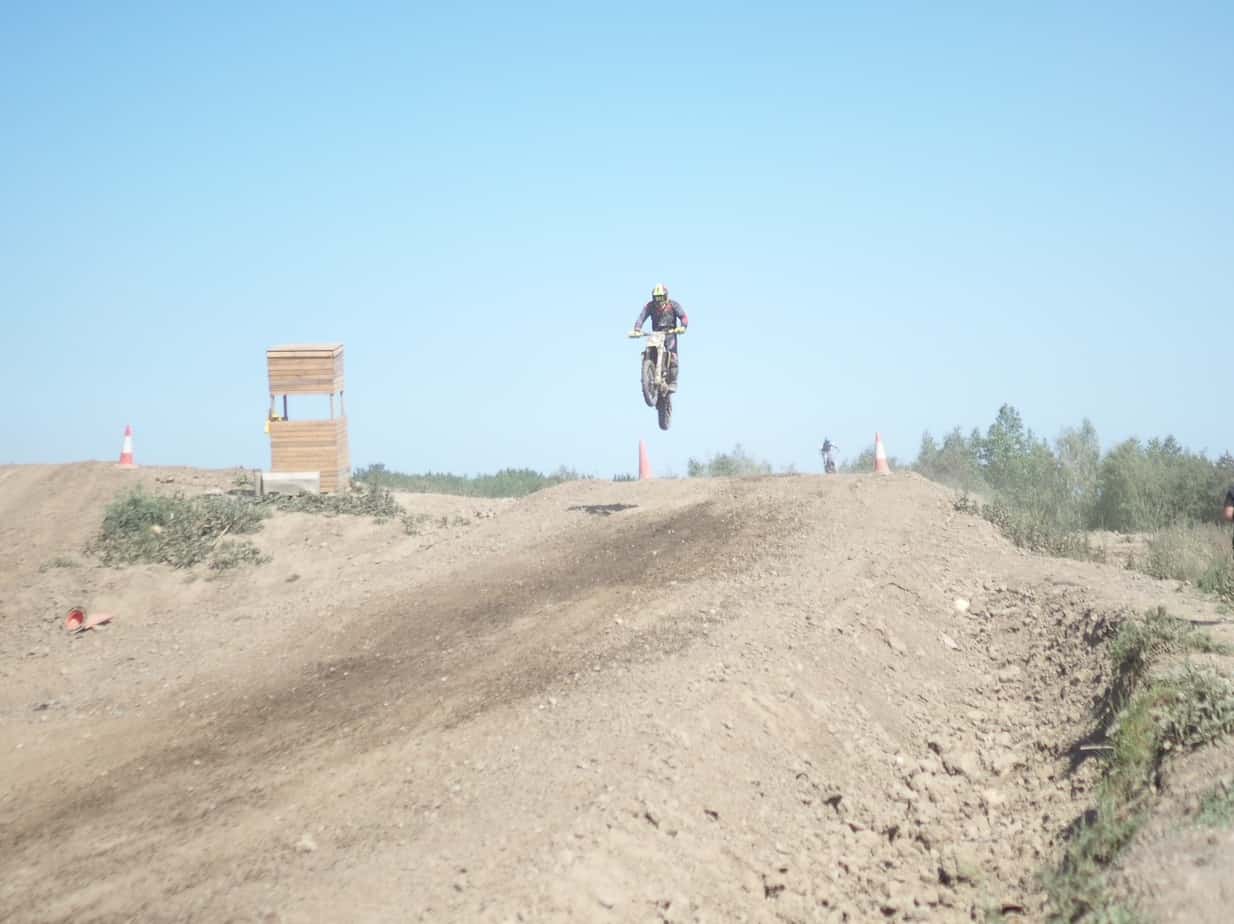 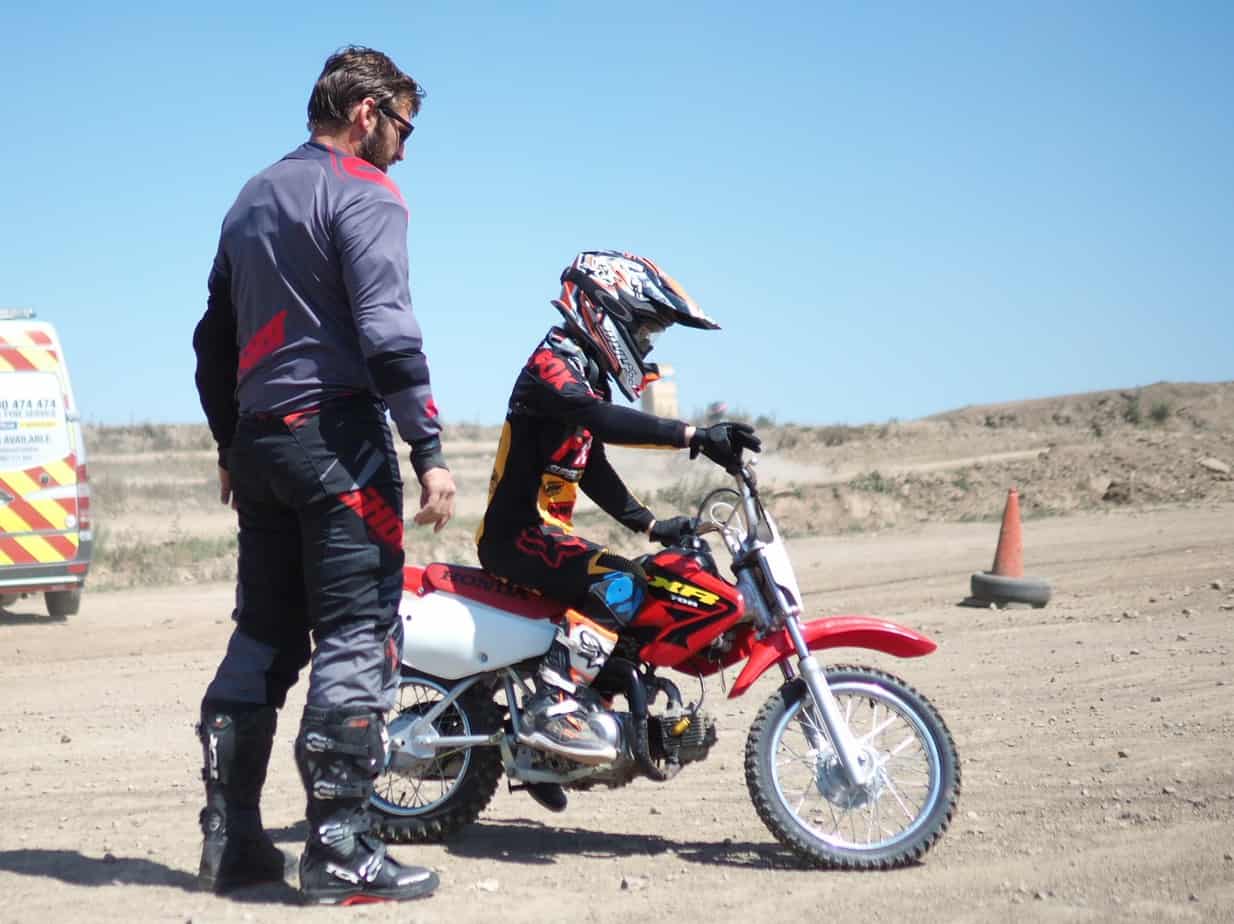 As Blake was whizzing round the track and Shaun and I stood there watching I said “Do you ever regret we didn’t have any more kids?”

“Yeah. At times I do. Like this. This is amazing. He’s a great kid. I do wonder if we messed up a bit there.” he replied.

“I know, I always say I couldn’t be bothered again because we’d have to go through all this shit again. But it’s not shit is it? It’s brilliant. At every age I’ve said he’s the best age, but he just gets better and better.”

“I do think about him when we are gone, him being on his own worries me.” Shaun replied.

“Yes, but that’s not a reason to have more kids. He will be fine and he’ll be a grown up! You’re thinking about that as if he’s a kid. Anyway, sod bringing a baby here. And we’ve only got three seats in the van!”

So with the discussion about kids over again for another few months, we packed up the van and headed home. We raved all the way home to loud music, got called ‘cringe parents’ and reflected on the day. I think the boys were pleased I’d enjoyed it so much and I will definitely be going back.

On the way home to Blake I explained that if I were a battery, certain things would help me charge up. Walks down our lane with the dogs, reading, good food, journaling, writing and performing all charge up my personal battery. As do evening snuggles with the boys, family movie nights, waking the dogs up in the morning and now… motocross.

I never in a million years thought I’d say that but I know in the future when I reflect back on what have been the best days of my life, this day will definitely feature.

What about you? What have been some of the best days of your life? Use this as a journal prompt or come and share your experiences with us in the FREE Self Discipline Support group here. 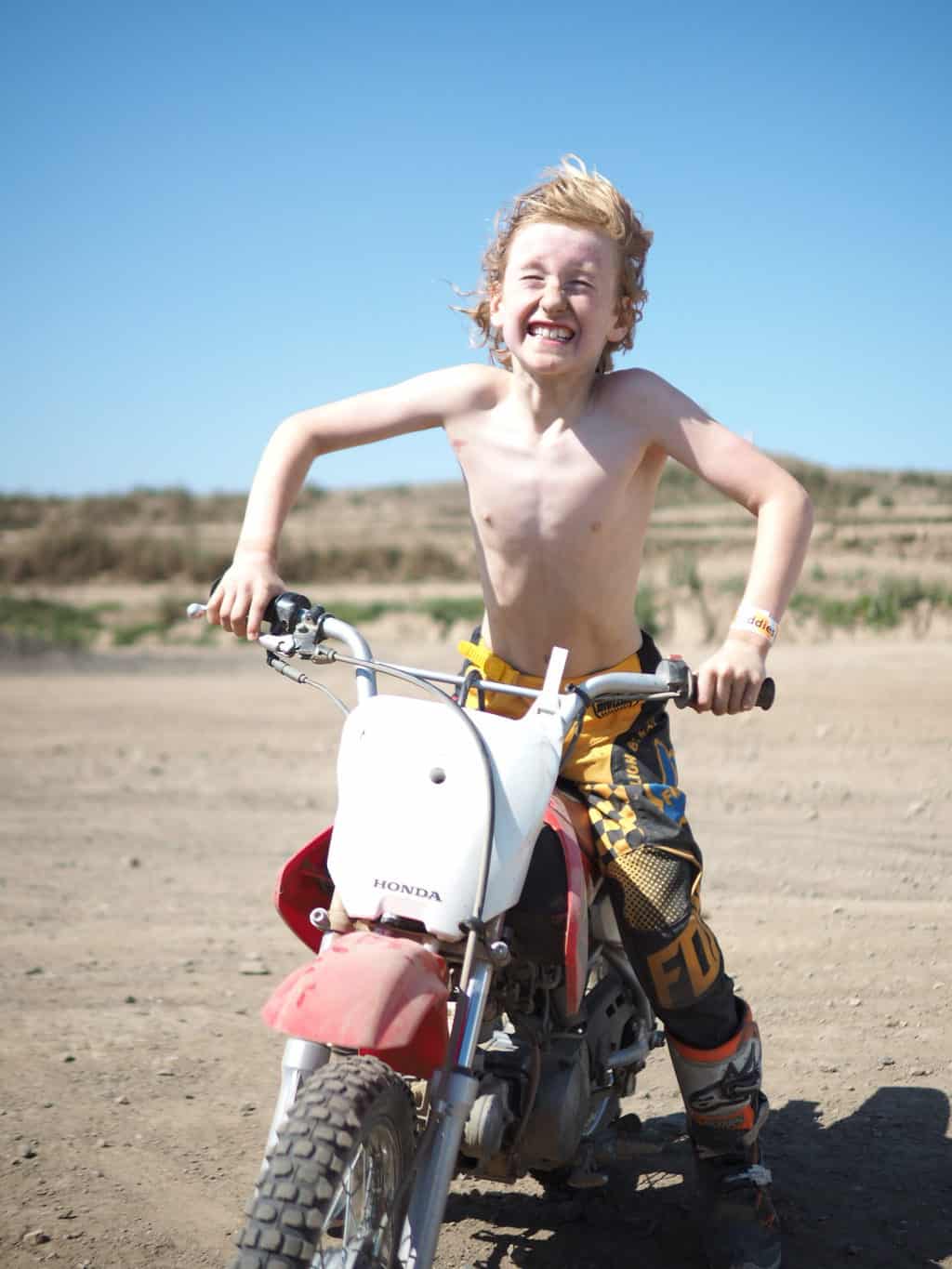 The face of pure joy…