The Power of a Productivity Song 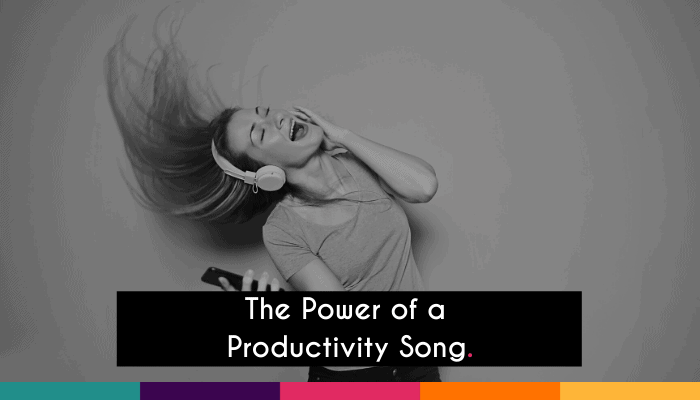 “I’d love to be as focused as you,” someone said to me yesterday. Which made me smile because I often don’t feel focused at all. I don’t think many of us can honestly say we nail our productivity levels every day and that’s OK and normal.

Over the last few years of living, breathing and being everything self-discipline, self-development, productivity and busting procrastination, I have gone through many different techniques to stay focused in my work.

I’ve got a multitude of tricks up my sleeve but one of the easiest things anyone can do is decide on a productivity song.

What is a Productivity Song

If you’ve ever been to a boxing match you’ll know that boxers have a signature tune that they come into the ring to. They play this particular chosen piece of music loud, it gets them fired up and they get in the zone and focused ready to take on their opponent. The music becomes part of their routine and ritual. They repr5eat this process with every fight and match. The boxer’s brain becomes wired ready for action as the music changes their brain state and signals that it is time to compete.

When I was 19, I passed my driving test at long last, a lot later than most of my friends. At the time most of my friends had also gone off to University and I’d started a job as a civil servant working in international trade. The plan was always to just have a gap year and figure out what I wanted to do but I fell into a relatively well-paid job for my age and found myself in the rat race at 19, spending hours in the car every morning commuting to Manchester and Warrington. It eventually really got me down and a good friend of mine at the time sent me a card with a cassette telling me that I could believe to be anything I wanted. I think this was probably my first foray into the Law of Attraction and visualising what I wanted in life.

I placed the tap in the tape deck and listened as the heavy bass line started to pump through the shitty speakers of my white Nissan Micra. I found myself starting to tap on the steering wheel, then I was actively moving my body a little in the car seat and then as the music built to a crescendo I was banging my hand on the car roof ceiling, dust flying everywhere but with the biggest grin on my face.

“If you believe, you’ll find a way!” screamed the powerful vocalist over the funky guitar riff and deep boomy base.

It was ‘Believe’ by Ministers de la Funk featuring Jocelyn Brown and it became my signature pick-me-up song that has been the soundtrack to my dark days and my bright days ever since. I love this song so much I want it played at my funeral and the rule is everyone MUST dance in the aisles. Otherwise I will be back to haunt everyone.

This song has got me through some of my toughest days. Break ups, an awkward work disciplinary, financial trouble, arguments, friendship fallouts and job rejections. I have played this song so much and used it to change my mood and brain state so often that I swear it would be better than any antidepressant for me! When I had my nervous breakdown, it was this song I would play on the way home from the school run to stop me from crawling back into bed and hiding from the world.

It is also the song that is GUARANTEED to get me in the zone ready for a productive day at my computer.

In the same way Pavlov could ring a bell at his dogs before feeding them and eventually they started to salivate at the sound of the bell, I can play my productive song and instantly ‘salivate’ from my mind, changing my motivation levels and brain state.

I encourage everyone I meet to have their own song to get them in the zone. I do have a couple more that also work and do the trick; Gloria Estefan Conga, Sash Encore un Fois, Sneaky Sound System Pictures, TV Rock Flaunt It and Nile Rogers I’ll Be There. I know I’ve got a strange taste in music but it is these songs that sort my head out and help me #PullMyFingerOut.

What about you? Do you have a song that instantly lifts your spirits, changes your state and gets you in the zone? Put that on a playlist with some other songs that are important to you and play it every day before you start your most important tasks. I promise it makes a big difference!

For more useful blogs, check out…