What I’ve Learned By Not Drinking For Six Months 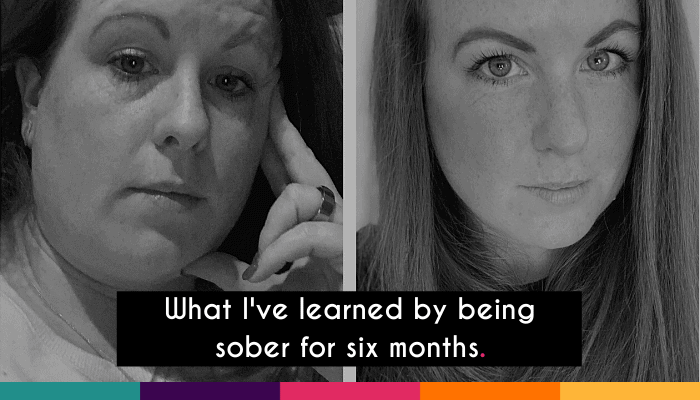 Lessons from being six months sober

Said my husband yesterday when I proudly announced:

I should point out that if you have ever had a problem with alcohol and identify as being a recovering alcoholic then go you! There is no shame in saying “Hey I had a problem with this, sorted it out and now I’m recovering.” In fact, I personally think it’s one of the bravest statements anyone can make and there should never be shame or stigma attached to it.

My story is not one of feeling like I had a regular problem with a drink as such, it is a story of realising that I am a person of extremes and my all-or-nothing lifestyle was not doing my health any favours. 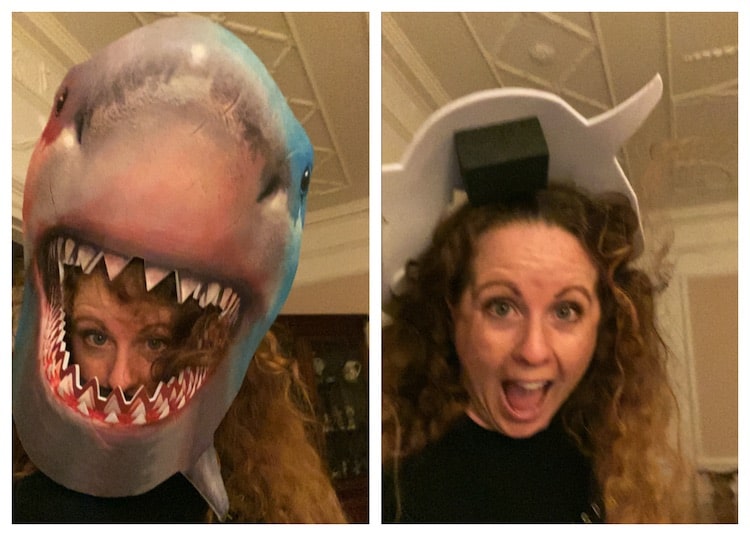 November 1st, 2019. Mum’s 60th birthday weekend away. I have no recollection of this evening!

The Ring That Warned Me About Booze and My Heart

In January 2020, I invested in an Oura Ring to track my sleep. On New Year’s Eve 2019, I decided that things were changing in 2020 and I wanted to make sleep and focusing on improving my sleep a priority for me.

At the time, I was around eight weeks into a challenge called #75Hard which saw me stop drinking for the duration of the almost 11-week challenge. I got my Oura Ring which I wear on my finger overnight and started to monitor metrics like my heart rate, heart rate variability (which is apparently a clue for morbidity and other underlying health issues), temperature and sleep levels including deep sleep, REM sleep and light sleep.

I love a gadget and ever since I’ve had my Oura ring, I wake up and check the Oura app straight away each morning. I love seeing how I have done with my sleep and my metrics like ‘readiness’. It gamifies sleep and I like that a lot.

In the middle of January, my #75Hard challenge came to an end. Yay! I could drink again! I had squirrelled away a load of expensive red wine from Christmas and now was the time to get stuck in.

The Booziest Month of My Life

Get stuck in I did, pretty much for a whole month, I drank that Christmas cupboard of booze dry. And I felt like death. I also noticed my anxiety and mental health were affected. I was having a racing heart every morning, feeling anxious and dreading the day.

On Valentine’s day, a group of 20+ of us from my running team went to Barcelona for the city’s half marathon. I wasn’t running (no, no, no) I was there to document the team’s weekend. The team pretty much turned to sangria, Prosecco and red wine to celebrate our amazing achievements and it became one of the heaviest weekends of drinking I’ve ever experienced. 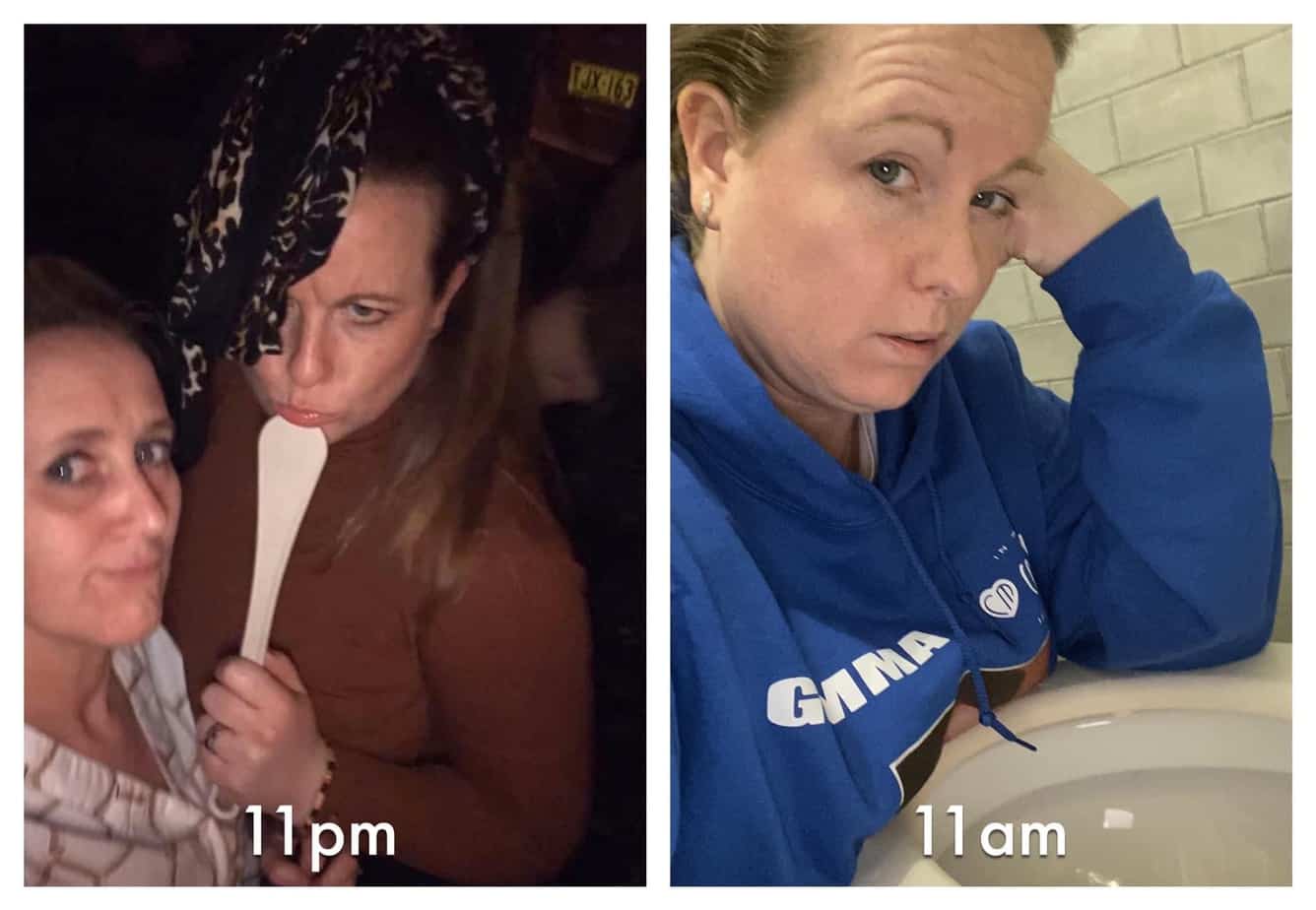 When I get sloshed, I get ROYALLY sloshed. Someone once said that I am like a grenade when inebriated and they wait for that moment where it feels like I’ve gone too far and the pin has been pulled out. The type of person I am, I don’t need a drink. I am the first one up on the dance floor whether sober or squiffy and I don’t need the buzz or fake confidence that alcohol gives you. So when you let me drink, woah, you had better be prepared for it.

That last night in Barcelona was messy. I tried to steal a flamenco dancer’s shoes, hit complete strangers on the bottom with the plastic spoon out of a sangria jug and almost smashed light fittings off the wall as I decided my sangria spatula also made an amazing drum stick. I fell asleep in our hotel reception, alone (Shaun was jumping around to Mr Brightside somewhere!) and my friend Karen was summoned by hotel security to collect me; not before I’d fallen into a vending machine.

Flying back to the UK the next day was a horrific experience. It was the mother of all hangovers and even a Big Mac whopper was not going to help. As I was hunched over my burger in Barcelona airport, contemplating my life choices, I read a blog by a friend of a friend who was talking about being sober for a whole year and how her life had changed. She had done it with an online company called One Year No Beer.

Over the next few days, I looked into One Year No Beer. I listened to podcasts and read articles of people who had been through the process. You didn’t have to do a full year if you wanted to, you could choose 28 or 90 days before committing to the 365 days.

By the Thursday 20th February, I was sold and I signed up. I have not looked back. I started off with the 90-day challenge and around halfway through that I was offered a discounted rate to extend to the full 365 days which I did. That was six months ago yesterday, meaning I’m halfway through the challenge I signed up for and I can’t believe how much better I feel.

I save a lot of money on taxis, booze and those late-night takeaways that are part and parcel of a drinking session. 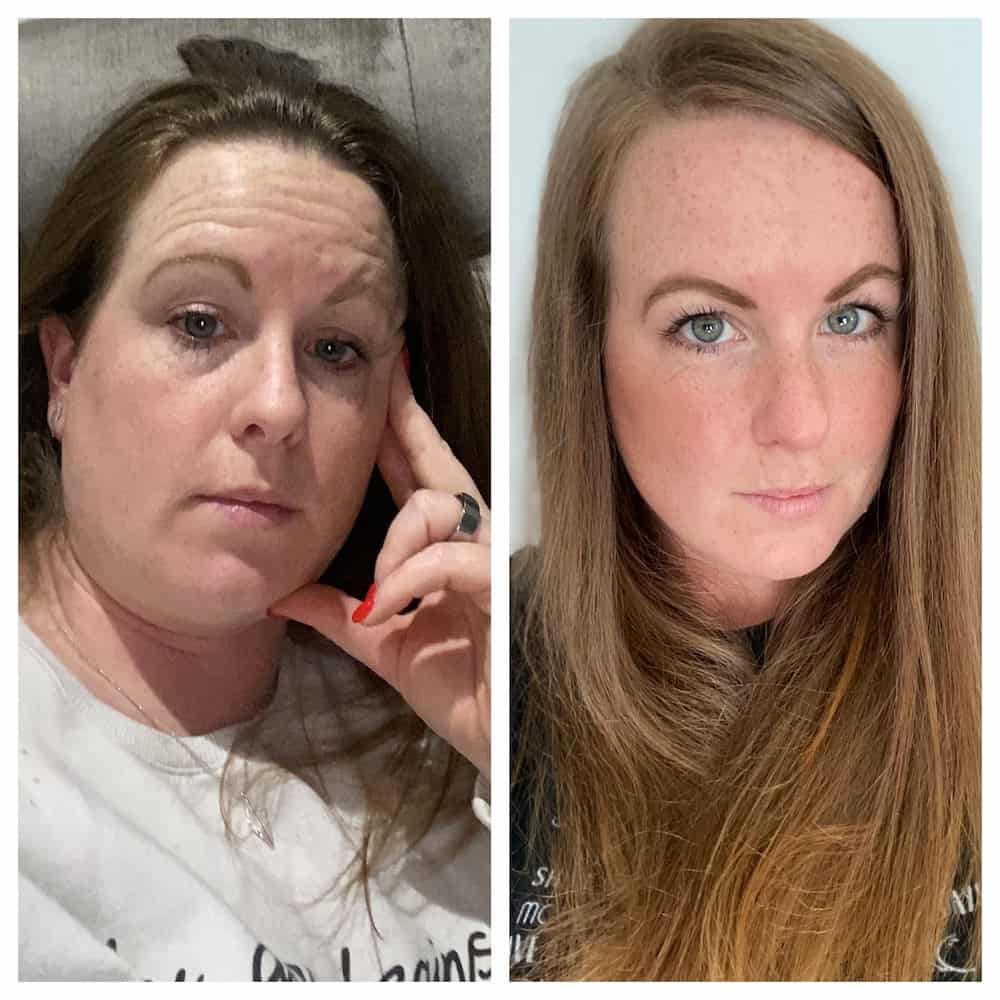 Six months apart! Hungover and full of anxiety on the left, full of energy and with a clear head on the right

I’m always really cautious talking about being alcohol-free as I sometimes think people might think you’re judging them for drinking. Not at all. I don’t mind what anyone else does. My husband and all my family members and close friends still drink. It doesn’t stop me having a good time at all. I also think Shaun likes the fact he always has a designated driver on hand!

I don’t want to say I’ll never drink again, but I can’t imagine why I would need to. I have discovered some brilliant alcohol-free alternatives like Nosecco which is alcohol-free Prosecco made from green tea. I do find that pouring some sparkling water with a bit of posh cordial and a load of ice into a big gin glass gives me that same relaxing feeling that a glass of wine did.

So, for now, I shall continue on my sober journey (even though hubby hates me calling it that) because I feel so good. My Sundays are no longer spent feeling rough and I feel like my brain fog has lifted.

Oh, and a big one – my heart health has improved massively! I’ve gone from a racing heart of 90 bpm when sleeping after drinking to 55 bpm. I think that was the cause of my anxiety (or ‘hangxiety’ as some people in the alcohol-free circles like to call it) and I love the fact I am free from it.

A Non-Scale Victory I Am Thrilled About 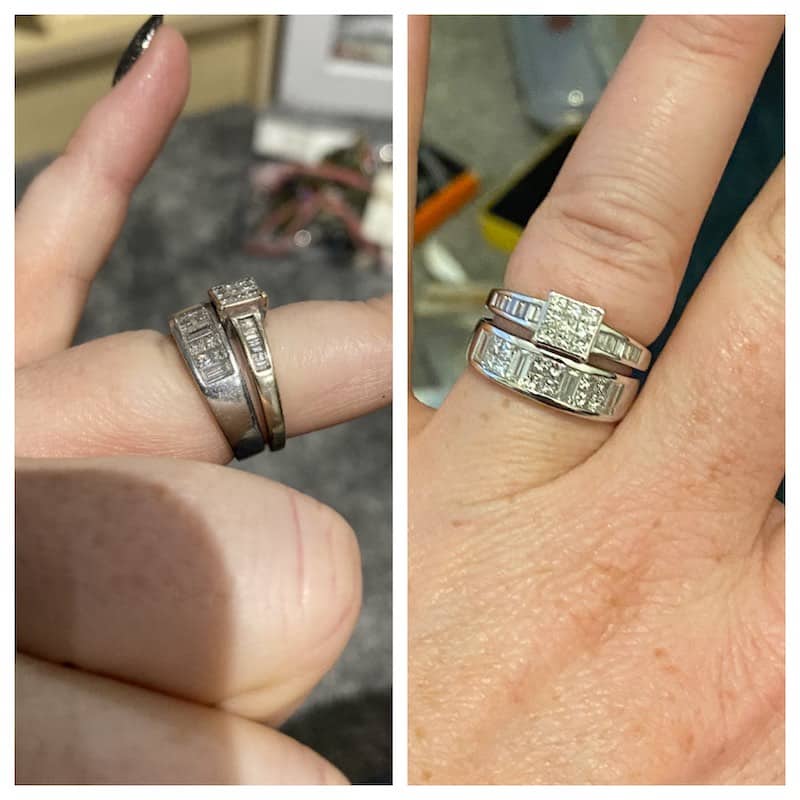 On my milestone yesterday I also celebrated something really important to me. I tried my wedding and engagement ring on and for the first time in almost four years, it fits me again. This is a non-scale victory I have been working towards for a long time and I am so thrilled it happened on my six months sober anniversary. I can’t even begin to explain just how good it felt seeing both on my fingers.

The pic on the left is from November when I started #75Hard and the pic on the right is yesterday. Big thanks to my sister who also got my rings dipped and cleaned up ready for this moment! Now the only problem I have is that my Oura Ring feels super weird on my ring finger on my right hand and I’m not giving up wearing that little beauty!

If you too would like to explore what life would be like without alcohol, I strongly encourage you to have a look at One Year No Beer and their 28, 90 and 365-day challenges. I like the OYNB community because it doesn’t demonise drinking at all and welcomes people who want to try having a break and then explore moderation if that is right for them. It’s a great programme and community. I’ve not been paid to promote them, I just know they’ve helped me change my life and I’d like to let you know about them too.